The Activist, The Boxer, The Writer: Three Black Muslim Men in History 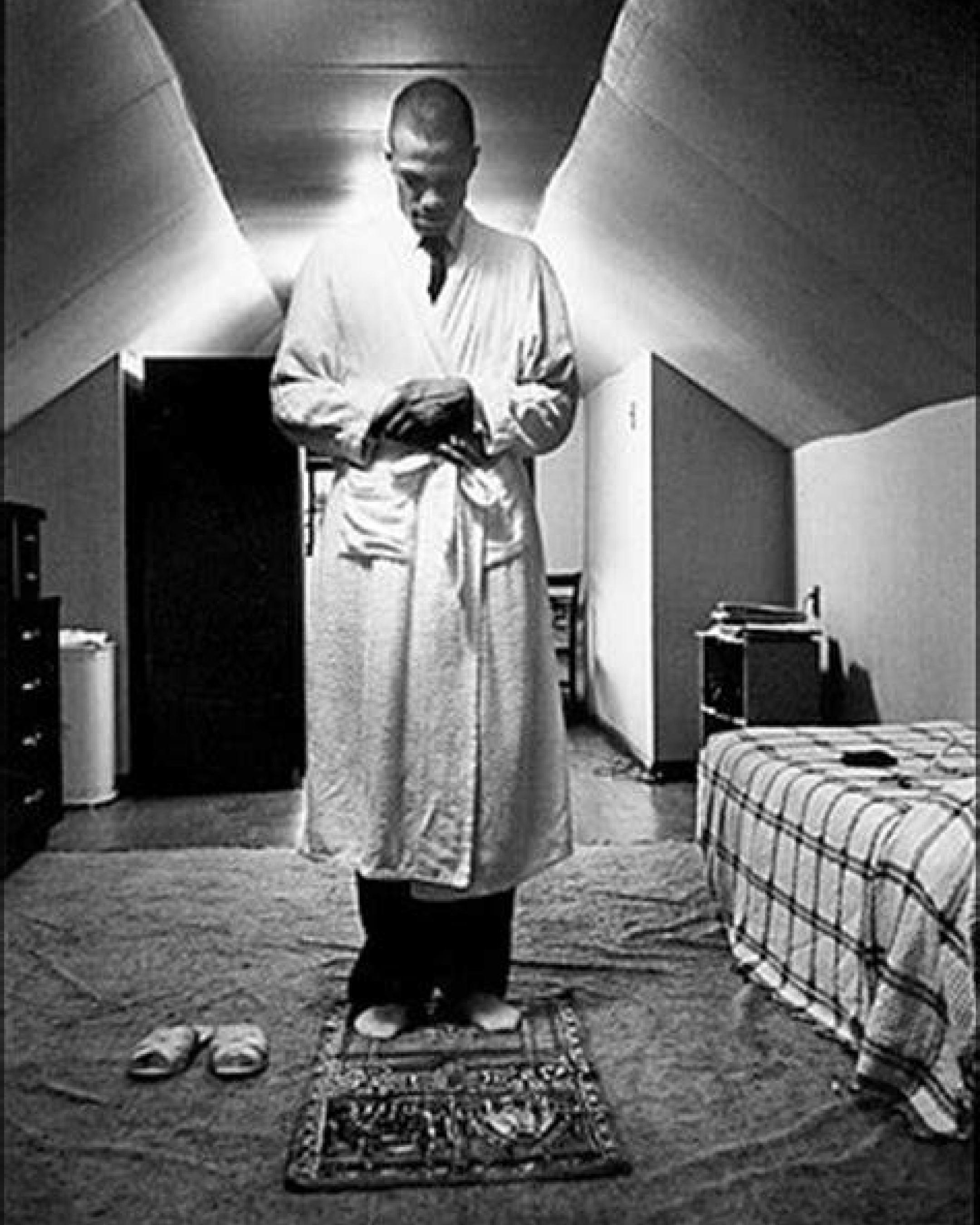 Malcolm X was born in Omaha, Nebraska, as Malcolm Little. With the reported death of his father and the subsequent imprisonment of his mother, he faced enormous tragedy after traveling to the Midwest with his family at a young age. Malcolm dropped out of middle school after spending his remaining childhood years in foster homes with his brothers and traveled to Boston a few years later to work as a shoe-shiner, drug dealer, gambler, and burglar. Malcolm X became deeply motivated to improve his studies while serving a ten-year sentence in jail for burglary. It was also around this time that Malcolm's brother informed him of the Nation of Islam's (NOI) principles and encouraged him to convert to Islam. The NOI sparked Malcolm's interest, so he began researching Elijah Muhammad's writings, who preached against systemic injustice and strove for a society free of White people.

Malcolm X was an ardent believer by the time he was freed from prison, and soon after meeting Muhammad and agreeing to serve for NOI, he changed his surname to "X." The change was meant to represent the shedding of his slave name as well as the "x" that many slaves were forced to wear as a brand on their upper arm. Malcolm X was swiftly elevated to the position of minister and national spokesperson for the Nation of Islam. He was also tasked with the construction of new mosques across the country. He returned to Boston and was appointed Minister of the NOI's Temple # 11 in the city. He was also chosen to lead the NOI's mosque #7 on Lenox Avenue in Harlem, as well as mosques in Detroit, Michigan, and Philadelphia, Pennsylvania. His public speaking engagements and media appearances also helped raise knowledge and interest in the Nation of Islam. In fact, Malcolm X is substantially responsible for the NOI's growth from 500 members in 1952 to 30,000 in 1963. However, due to the nature of his activity, the FBI and the federal government paid special attention to Malcolm X. The FBI infiltrated the NOI organizations in which Malcolm X was active at times, and the group's communications and actions were closely watched. Malcolm X was muted for 3 months by none other than Elijah Muhammad shortly after this revelation for publicly denouncing John F. Kennedy shortly after his assassination. While he honored the command, he publicly proclaimed his break with the Nation of Islam and created his own religious group, the Muslim Mosque, Inc., not long after.

Malcolm X returned to the United States with renewed vision for his work after a journey to Mecca, Saudi Arabia, where he shared his views and visions with individuals from all walks of life. He began to focus his efforts on individuals of all races and nationalities, not only African Americans. Human rights, freedom, action, and community development were all topics he preached on. Malcolm X has been targeted for assassination while re-establishing himself among old tensions. Attempts on his life and threats to his wife, Betty, and four daughters were made. His family's home was firebombed in February 1965, and while everyone survived, no one was ever convicted with the crime. One week later, on February 21, 1965, three men rushed Malcolm X on stage at a speaking engagement in Manhattan's Audubon Ballroom and shot him 15 times at close range. When he arrived at Columbia University Medical Center in New York, he was pronounced dead. Many others have been influenced and informed by Malcolm X's legacy and efforts in their battle for social justice and equality‍

Muhammad Ali was an African American boxer, philanthropist, and social advocate who is widely considered as one of the 20th century's greatest athletes. Ali was born in Louisville, Kentucky, on January 17, 1942. Cassius Marcellus Clay Jr. was his birth name. Ali showed early on that he was unafraid of any fight, whether inside or outside the ring. He encountered racial prejudice and discrimination firsthand as a child growing up in the divided South. Ali realized his boxing talent at the age of 12 due to a strange turn of events. Ali told a police officer, Joe Martin, that he intended to beat up the thief after his bike was taken.

Martin, in addition to being a cop, also coached young boxers at a nearby gym. Ali began his boxing career after working with Martin to learn how to spar. In 1954, he won his first amateur fight by a split decision. Ali went on to win the Golden Gloves event for light heavyweight novices in 1956. He won the National Golden Gloves Tournament of Champions three years later, as well as the Amateur Athletic Union's national light heavyweight title.

In 1960, Ali won an Olympic gold medal and in 1964, he was crowned world heavyweight boxing champion. Ali won the heavyweight title twice more in the 1970s after being suspended for refusing military duty, winning famous fights against Joe Frazier and George Foreman along the way. Ali, who was diagnosed with Parkinson's disease in 1984 and spent much of his time philanthropizing, was awarded the Presidential Medal of Freedom in 2005.

In 1964, Ali became a member of the Nation of Islam, a African American Muslim organization. He first went by the name Cassius X before deciding on Muhammad Ali. During the 1970s, the boxer eventually converted to traditional Islam. In April 1967, he was drafted into the military but refused to serve because he was a practicing Muslim imam with religious views that barred him from fighting. He was caught for committing a crime and had his world title and boxing license revoked from him nearly immediately. In June 1967, Ali was found guilty of breaking Selective Service requirements and sentenced to five years in jail by the United States Department of Justice. Ali missed more than three years of his athletic career due to his inability to participate professionally in the meantime. Ali returned to the ring in 1970, defeating Jerry Quarry, and the conviction was subsequently reversed by the United States Supreme Court in June 1971. After losing his belt to Leon Spinks in February 1978, Ali conquered him in a rematch in September 1978, becoming the first heavyweight champion to win the title three times. Ali returned to the ring in 1980 after a brief hiatus to face Larry Holmes but was outmatched by the younger champion. After a last loss to Trevor Berbick in 1981, the boxing legend retired from the sport at the age of 39. Ali had nine children from four marriages, including two children he fathered outside of marriage. Ali revealed he had Parkinson's disease, a degenerative neurological disorder, in 1984. He stayed active in public life despite the progression of Parkinson's disease and the advent of spinal stenosis. In Phoenix, Arizona, Ali raised money for the Muhammad Ali Parkinson Center. In January 2009, as Barack Obama was sworn into office, he was present to witness the inauguration of the first African American president. Ali had surgery for spinal stenosis, a disorder that causes the spine to shrink, limiting his mobility and capacity to communicate, a few years before his death.

Ali volunteered in a variety of countries, including Mexico and Morocco, to assist individuals in need. Because of his involvement in underdeveloped countries, he was named a United Nations Messenger of Peace in 1998. President George W. Bush awarded Ali the Presidential Medal of Freedom in 2005. Ali won the NAACP President's Award for his public service work shortly after Obama's inauguration in 2009. Ali passed away on June 3, 2016, in Phoenix, Arizona, after being admitted to the hospital with a respiratory problem. He was 74 years old at the time. Parkinson's illness and spinal stenosis had been plaguing the boxing legend.

Abu Uthman ibn Bahr al-Kinani al-Basri, also known as Al-Jahiz, was an Ethiopian-born Muslim writer. He was born in Basra, Iraq's second largest city, in the year 776. Despite his family's poverty, Al-Jahiz continued to seek knowledge and attend lectures on topics such as Arabic poetry, philology, and lexicography. The information he gathered and his eagerness to learn led to the publication of more than two hundred books, yet only thirty of them survived.

“Kitab al-Hayawan '' is Jahiz's well-known work (Book of Animals). This multi-volume work includes pre-Islamic poetry, personal observations, narrative, and Aristotle's zoological texts as well as pre-Islamic poetry, personal observations, storytelling, and Aristotle's zoological texts. Despite the fact that the Book of Animals covers a wide range of topics, the amount of scientific information provided is invaluable. In this book, Al-Jahiz presents the concept of biological evolution. Following his observations of animals and insects, al-Jahiz came to the conclusion that there must be some factors that influence animal evolution, 1000 years before Darwin. Al-Jahiz discusses three major mechanisms: the struggle for survival, the transition of species into one another, and environmental influences.

"Animals engage in a struggle for existence, for resources, to avoid being eaten, and to breed," Al-Jahiz wrote. "Environmental conditions encourage organisms to acquire new features to ensure survival, resulting in the emergence of new species," he concluded. Animals that live long enough to reproduce can pass on their successful traits to their offspring." It was apparent to him that one species is always stronger than the other, and that species must evolve new features in order to live. These new traits aided species' adaptation to changing environmental conditions and resulted in the emergence of new species. Al-Jahiz added a mystical element to the mechanics, despite the fact that they are scientific. The complexity and wonders of God's creation had to be appreciated by the reader.

However, Jahiz’s Book of Animals is not his only notable accomplishment. The Book of Misers, for example, is a well-known book. It's an encyclopedia of social, literary, and historical topics. In addition, he published volumes on human psychology, language, and grammar. They're all written in a simple language that everybody can understand. In his scholarly papers, he would occasionally include hilarious anecdotes and comments. The poor fish-son seller's died in Basra in 868, leaving behind an astonishing oeuvre. It's unclear how he died, but there's no denying that his work was and continues to be revolutionary. He is also referred to as the "Father of Evolutionary Theory."