3 Signs He's Just Not That Into You 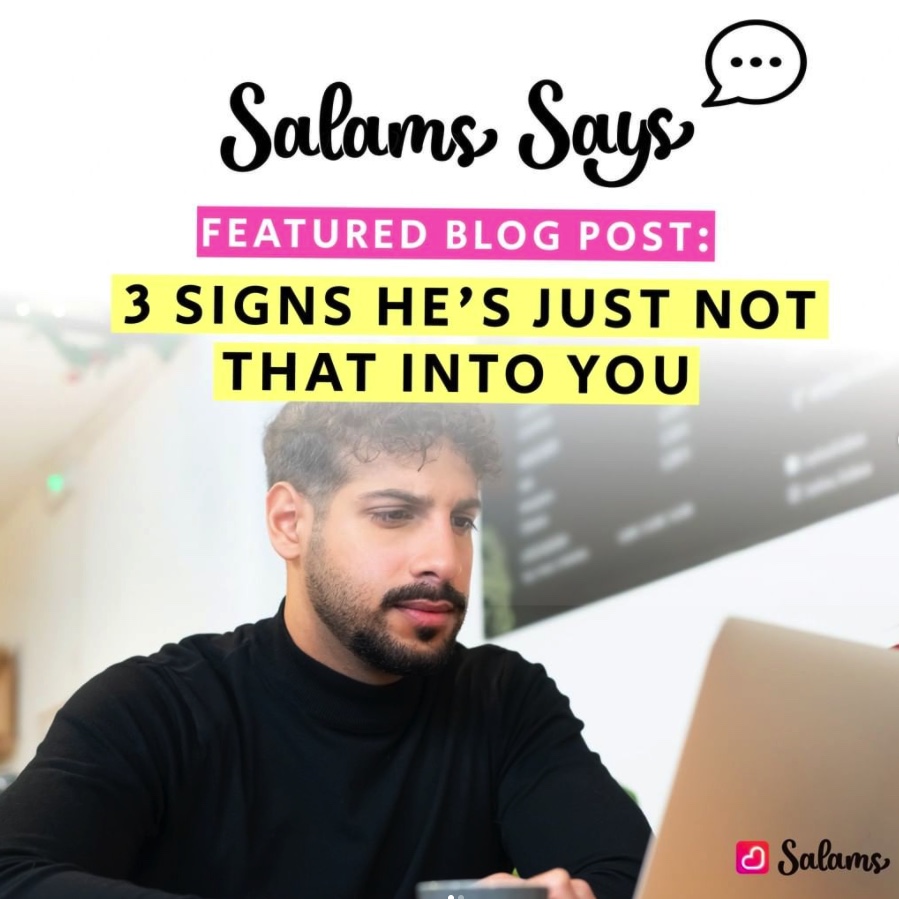 There’s an age-old adage that says: if a man wants a woman, he’ll make it happen. Sometimes, we women of the modern age forget this. Sometimes, when a guy starts to pull back, we give him excuses. We say, maybe he’s really busy with work or he’s being cautious with his feelings. All the while, he’s really showing us that he’s just not that interested.

You might be new to this husband hunt thing, but I’m not. So let’s run through a few scenarios where it’s clear, he’s just not that into you.

You’ve been messaging back-and-forth for hours, possibly even days. Maybe you had a call or you met up in-person. Everything is fine and then BOOM. Something changes and his texting slows.  He hasn’t ghosted, but he’s not replying at the same rate as before. What does this mean???

Interpretation: He’s just not that into you. As a general rule, when guys are interested they will keep up communication. Usually, if men are in their feels, they’re consumed by them. You’re the first thing on his mind when he wakes up in the morning and the last thing before he goes to bed. He’ll probably send a Good morning or Good Night! text message. While there are situations in which someone is so busy with work or other family obligations that they understandably don’t have time for a full blown conversation every single day, most of the time, the guy who is trying to marry you will briefly message, every single day.

I remember this one potential I met a few years ago on Salams. He was a med student and I was really interested in him. We started out with really engaging phone conversations and texts about deal breakers and life goals. He told me at the start that he was about to take his Medical Boards and apologized in advance for not being available. I was sympathetic, and patient. Too patient. I let him get away with multiple days of silence because I thought I was being respectful of his time. Fast forward almost six weeks later and it turns out those little signs of “busyness” really translated to I’m just not interested enough to make the time for you.

So while you should always be considerate of someone’s life circumstances, you should be wary of any guy that lets days go by without communication.

You’re on a call with him for the first time. Previously, you had thrown a few details about your life his way via text, but now you’re ready to dive deep into conversation. For the first 15 minutes of the call he tells you about himself: his family, his friends, his hobbies--things you didn’t even ask, but he felt compelled to mention. You don’t dare to interrupt because that’d be rude, right? So you wait until he finishes and then you ask a few follow up questions. He responds. Then, when you answer his question about your family, friends and hobbies, he asks no follow up questions. In fact, he slides into a new topic. Throughout the rest of the call, he dominates the conversation. He never circles back to what you said about missing your family in another state while you’re in grad school. He doesn’t want to know more about your hometown, or the new Arabic class you started taking. He just slides past the gems you’re dropping. No follow up.

Interpretation: He’s just not that into you. When a guy is really interested he’s going to ask you A LOT about yourself. He’ll want to know about your mother and father, your favorite breakfast food, and your third grade teacher! I’m kidding--kind of! Like I said, the (one) compliment I always give men is how laser focused they can be with things they are passionate about, like sports, money, and cars. When they get into something, they go deep. So of course, when they meet a new woman they’re interested in, they’ll want to study her like a history book. They go deep into the conversation.

Whenever I meet guys who are really serious about getting to know me, they ask lots of questions. Their probing isn’t like an FBI agent conducting an interrogation, but rather like an infant who has just tasted sugar for the first time and demands more. These are the guys who want to know more about my Tuesday night writing group, the ones that want to know what it was like growing up in a split household, and how old I was when I discovered how much I really love Islam. These are the types of relationships that have a chance, because these are the guys that want to invest time in getting to know you.

3. He Doesn’t Make Moves to Take it to the Next Level

It’s been a few weeks since you matched. You have moved off the app and have been texting pretty regularly. He tries to make you laugh by sending silly GIFS during lunch, and you respond with laughing emojis in return. Sometimes you Facetime, or send photos of your dinner. Things seem to be going well. You tell your bestie about him. You daydream at work. You start imagining your wedding. You’re ready for the next step. Which is what? You’re not sure? How come? Because he didn’t tell you how he wants this to go. Or maybe he did, but he hasn’t made moves to A. Plan a trip to meet in-person  or  B. Call your Dad/Wali. So what does that mean?

Interpretation: He’s probably not really sure if he’s into you. If you are weeks into it, and his communication is normal and consistent and makes you feel good, he might be into you, but he’s not at the level where he’s ready to commit to marriage. He knows you might be good wifey material, but he doesn’t know if you’re right to be his wife.

This scenario is by far the hardest because you’ll want to tread lightly. It’s possible he’ll come around in another few days and let you know what he wants. Then again, maybe he’ll let this go on for weeks or months before you finally go crazy and just ask so what are we doing here?! It’s up to you how long you want to wait. But know this: a guy who is interested and is ready for marriage will move mountains to show you he means business. He’ll buy a ticket to come see you and offer to talk/meet your dad for his blessing to simply continue talking.

Now that you know how to issue-spot, you can cycle through the unserious faster, and find the man you're meant to marry. While each situation is unique and there are no exact days that can be attributed to each phase of a courtship, a man that is interested will move speedily to secure your heart and lock it down. All I can say is trust your gut, and make istikhara. Allah (SWT) will always show you a man’s true colors if you ask for His (SWT’s) help.