7 Facts About Jummah Friday: What Every Muslim Should Know 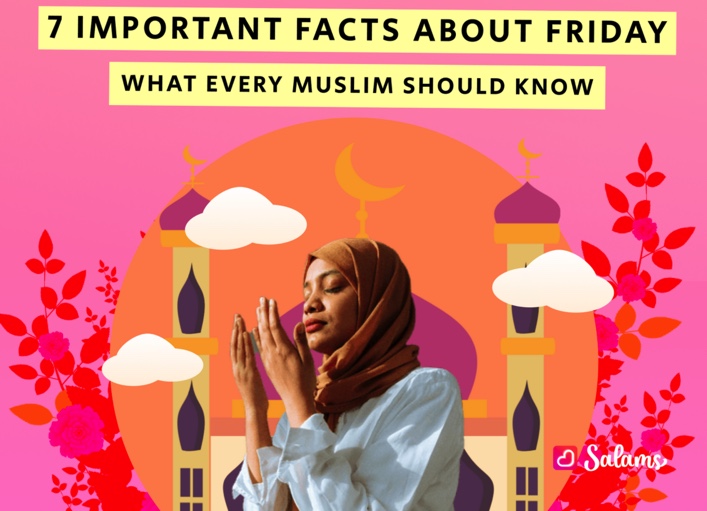 Jummah Friday is considered to be the most blessed of all the days. The businesses are shut down early for Jummah prayer and Muslims gather in a mosque to offer a congregational prayer replaced by the Zuhr prayer. Jummah is also one of my favorite days too. I eagerly wait for it.  I love to send my acquaintances the Jummah Mubarak messages along with prayers for my friends and their families. You can not deny the fact that there is this peaceful and calm vibe on the day of Jummah that allows Muslims feel so grateful that Friday has arrived and to anticipate the next Friday. It's not just because the weekend is here, and for many the work week is over, but Allah has choose this day to be specifically special and there are special virtues of this day that all muslims should know.

There is a special way to prepare for the Friday Jummah congregation. It is a Sunnah to take a Ghusl(shower) and wear new clothes on Friday. It is also instructed to put on nice fragrances and clip nails. As we prepare for this blessed day we should understand the sweetness of the origin of Friday(Jummah). As muslims, many of us understand the benefit of reading Surah Al Kahf and send blessings upon the Prophet Muhammad (PBUH) as much as possible. People give charity and seek forgiveness of Allah. They try to do as many good deeds as they can because the reward is given twice on the deeds.

"Any man who performs Ghusl on Friday perfumes himself if he has perfume, wears the best of his clothes, then goes to the mosque and offers as many prayers as he wishes while not harming anybody, then listens quietly while the Imam speaks until he offers the prayer, will have all his sins between that Friday and the next forgiven.”

So let us reflect on why Friday has such an importance in in Islam, a day of blessing, a day of celebration, a day of reflection, and why it is considered the most blessed of all days.

Allah created Adam (A.S) the first human being on earth, on the day of Jummah.

It is the same day where Adam was made to enter paradise. His repentance after getting evicted from paradise was also accepted on the same day. Adam(A.S) died on the same day too. As many important incidents happened on this day, it has a significant importance for us all Muslims.

On the authority of Tariq ibn Shihab (RA) who said,

’A man from the Jews came to ’Umar [RA] and said, “O Commander of the Believers, if this following verse had been revealed upon us - ‘This day I have perfected your religion for you, completed My favours upon you, and have chosen for you Islam as your religion’ (then) we would have taken that day as an Eid day’. Umar [RA] said, "I know definitely on what day this Ayat was revealed; it was revealed on the Day of ’Arafah, on a Friday"

So Friday also became a day of mini-Eid celebration for us.‍

3. Protection from trial of grave:

It is reported that the Holy Prophet (PBUH) said that a person who dies on the day of Friday will be protected from the trial of the grave.

The day of judgement will occur on Friday as well. In one of his hadiths, Holy Prophet said,

"Among the most excellent of your days is Friday. On it Adam [AS] was created, on it he died, on it the last trumpet will be blown and on it the shout will be made, so invoke more blessings upon me on it, for your blessings will be presented to me".

Therefore we should do more good deeds and send blessings upon the Prophet (PBUH) on the day of Jummah.

The messenger of Allah (PBUH) once stated:

"Whoever reads Surat Al-Kahf on the day of Jummah, a light will shine for him from beneath his feet to the clouds of the sky, which will shine for him on the Day of Resurrection, and he will be forgiven (his sins) between the two Fridays.”

The Surah also serves as a protection against the evils of Dajjal.

There is a special hour of the day in which all prayers get accepted as it is confirmed by the Holy Prophet:

7. Reward of Fasting a Year:

You'll be amazed to know that the reward of attending Friday sermon is equal to the  reward of praying Qiyam and fasting for a full year.

Friday holds a special importance for all the Muslims. On this day, we should try to do as many good deeds as possible. May Almighty Allah accept our efforts and guide us on the right path. Ameen!