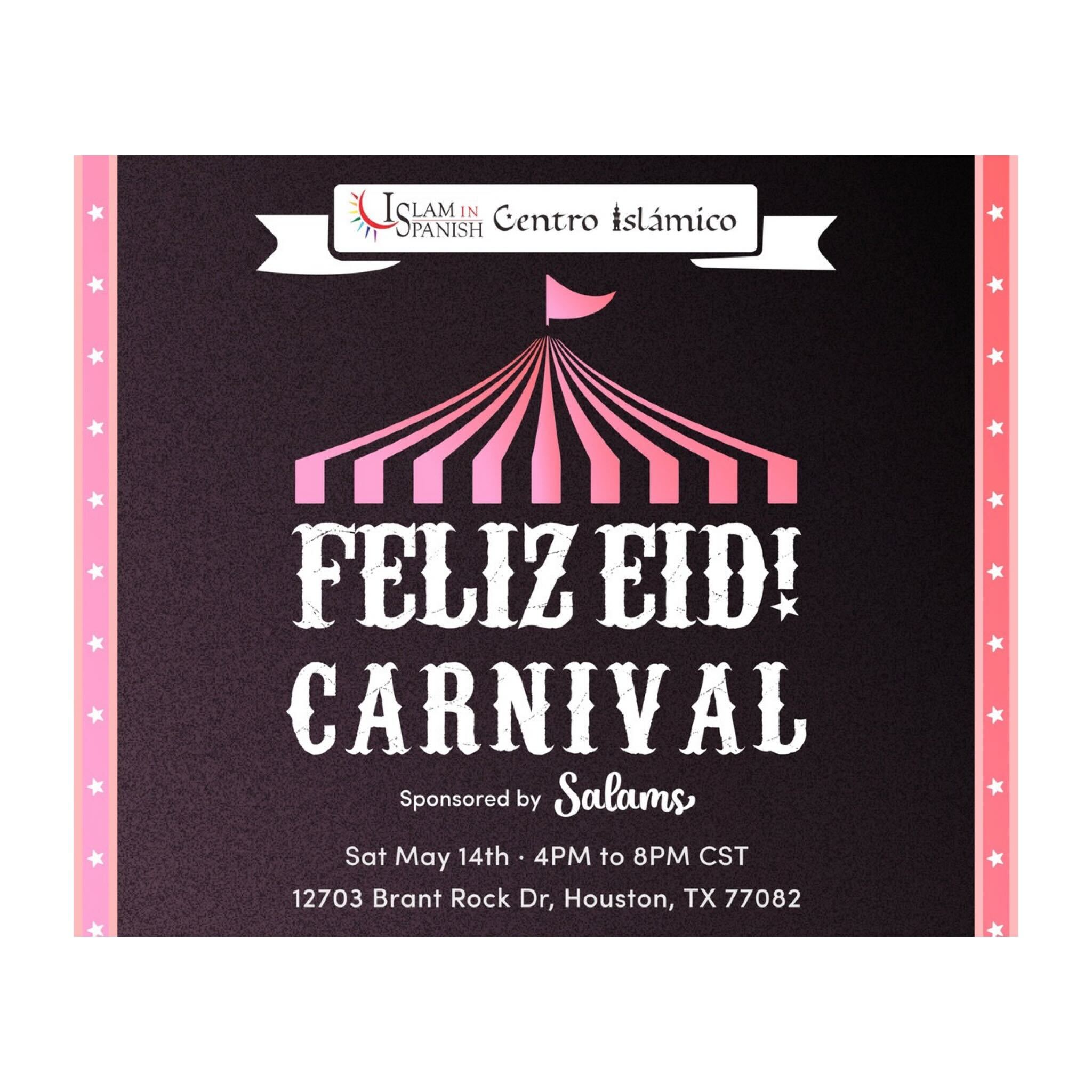 “Eid Mubarak!” and “Feliz Eid!” are both ways to spread the joyous greetings of Eid! The latter being in the Spanish language is relevant to a joyous occasion, an Eid Carnival being held at Houston, Texas at a unique Mosque called IslamInSpanish Centro Islamico. This mosque is the ONLY Spanish speaking mosque in the United States. Salams is sponsoring an Eid event at the IslamInSpanish Centro Islamico (IslamInSpanish Islamic Center) in Houston Texas on Saturday May 14th, 2022. The event will take place between 4:00PM-8:00PM CST!

What will you see at this event?

The goal of this event is for Muslims to feel unified for Eid Al-Fitr! Some Muslims who are new to the Islamic faith, Muslim Converts/Reverts, may not feel like they have anywhere to go to have fun on Eid. IslamInSpanish Centro Islamico has created a welcoming environment for all Muslims to feel excited to celebrate the Eid as a unified community!

Salams are proud sponsors of this event for the impact IslamInSpanish is doing for the Muslim community. Read more about the origin of IslamInSpanish here.

What is IslamInSpanish Centro Islamico?

At a local level IslamInSpanish was established in the city of Houston, TX right after the unfortunate events of September 11th, 2001 with the purpose to educate the local Latino community which make up about 45% of the city’s population about the truth of Islam in their native language. Initially the organization’s founding members operated out of the city’s almost 100 mosques carrying out local live on-going programs and now it operates out of the ONLY Spanish-speaking Islamic Center in the U.S. recently opened on January 30th, 2016 which has made history as the “IslamInSpanish Centro Islamico” has been featured on Spanish media outlets including CNN in Spanish, Univision, Telemundo, and other print media.

IslamInSpanish in the city of Houston began delivering once a month khutbahs out of two local masajid since 2013 for two years making the city of Houston the only city to have an on-going Spanish khutbah in the United States. After finding logistical difficulties it became necessary to carry out a weekly Spanish khutbah in one local and became one of the main functions of the newly established “IslamInSpanish Centro Islamico” as the ONLY Spanish-Speaking Islamic Center in the nation. This weekly Spanish Khutbah is not only the only Spanish khutbah in the United States but it is also streamed via online broadcasting to cover not only the U.S. Latino population but the International 700,000,000 Spanish-Speaking Latinos worldwide. Sometimes Latinos living in Latin America have accepted Islam with us online and they live in places where Muslims do not reside.

The mission of IslamInSpanish is to inspire, lead and pioneer solutions in educating Latinos and other communities about Islam through media production and grassroots outreach worldwide.

IslamInSpanish, based in Houston, Texas, is now funding a $2.2 million construction project. What started off as an agency to create Islamic knowledge resources in Spanish, later, evolved to a safe space for muslim reverts and all muslims to connect. Donate and get your sadaqa jarria.

Please see the below images of the end goal of the construction project:

Find out more about IslamInSpanish on their website: www.islaminspanish.org