How to understand Mahr 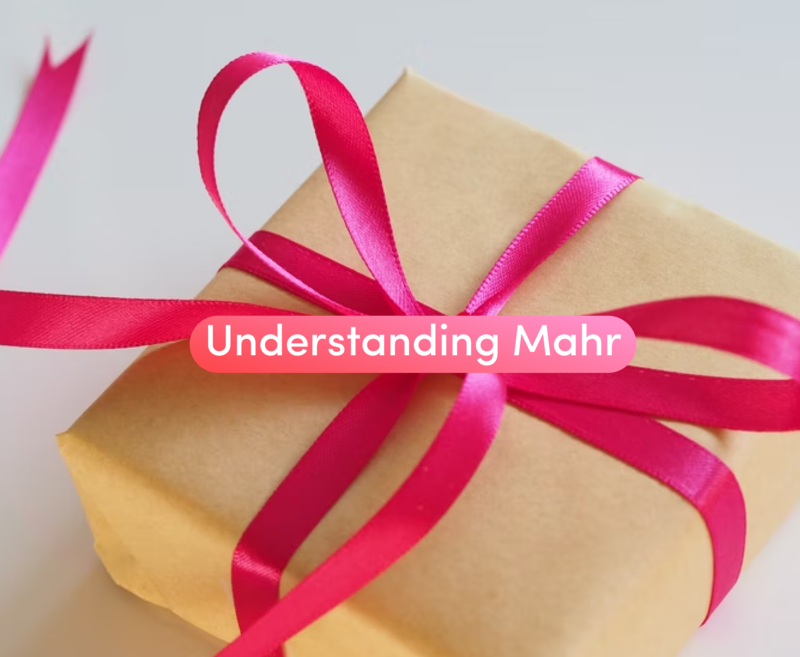 In many cultures across the world, dowries were provided by the bride’s family to the groom in order to offset the cost of adding her to his household. Books like Pride & Prejudice, showcase how a good dowry was required to secure a good marriage. In Islam, there is the tradition of a dowry, but it’s in the inverse— the husband is the one that gives a gift (usually of monetary value) to his bride-to-be. Before the marriage contract can be signed, the mahr must be given. We understand the importance and obligation of a mahr based on hadith which informs us that mahr isn’t restricted to just money.

And yet, somehow today, the Mahr sometimes is seen as another barrier to marriage. When it comes up during a courtship, people (usually the men or his family) hold their breath when waiting to hear the amount requested. I’ve personally heard stories about women asking for tens of thousands of dollars. On the flip side, there are horror stories about stolen or unfulfilled mahrs by the husband. How has something that was supposed to be a protection for women morphed into something hurtful?

Let’s take a moment to break down the mahr: it’s significance, what counts as mahr, and how muslims can take a more practical approach to mahr.

What is the Significance of Mahr?

There are several legal components to a nikkah. In addition to signing a formal contract with two witnesses, and the bride’s father or wali, there must be a bridal gift, called the Mahr. The mahr, in it’s simplest form, is a gift from the husband to his new bride.

The word mahr does not appear in the Qur’an, but instead various words are used to indicate it.

‘And give the women their dower (saduqat) as a free gift (nihla). But if they, of their own good pleasure, remit any part of it to you, take it and enjoy it with right good cheer.’ [4:4]

‘So, to those of them whose company you have enjoyed, give their dues (ujur) as obligated. There is no sin on you in what you mutually agree upon after the (initial) agreement.’ [4:24]

Prophet Muhammad said regarding the value of mahr:

“Go and look for something, even if it is a ring of iron.” (Al-Bukhari)

The practical value of the mahr is seen particularly in the cases when a woman may not have family  money or her own money. The gift is exclusively for the use of the woman. She should not give it to her family (unless she wants to for some reason).  The mahr may give her extra freedom to buy what she wants for herself. In the case of a divorce, a woman could rely on her mahr to take care of herself and her children. (In some cultures, there is even a tradition of asking for a divorce mahr which is a separate figure than the dowry to be given in case of a divorce).

In my research, I found scholarly opinions that demonstrated mahr was more than a practical safeguard of protection for the woman. Mahr is important from a psychological perspective. It encourages the man who is going to make the gift, or payment, to understand the value of a woman, and remind him that marriage is a serious undertaking.

A mahr ensures that a man understands he is taking on a financial obligation. It also demonstrates a man’s desire and goodwill to marry the woman of his choice, going the extra mile to make sure her request of him is fullfilled.

What is an acceptable Mahr?

In theory, one could ask for anything. Any amount of money, any type of (halal) gift–clothing, jewelry, cars, plane tickets. Anything. The woman names it, the man should fulfill it.

"...˹even˺ a stack of gold ˹as a dowry˺, do not take any of it back. Would you ˹still˺ take it unjustly and very sinfully?" {Qura; Surah AN-Nisa; Chapter 4 Verse 20}

Although I’m all for a woman knowing her value and naming it (aren’t we all worth a million bucks to marry??), some people take advantage. In these financial turbulent times, women should really think twice before setting too high of a number. So many factors are involved in that decision– how much money the guy makes, what you will use the money for, will you decide to work after marriage, was there a previous marriage in which your mahr wasn’t fulfilled. So many factors that could lead one to being a little “extra.”

If you’re looking for advice though on some parameters, a rough minimum or maximum, you can resort to these two hadiths:

“The best of dowries is what is easy [and affordable].” (Hakim, Bayhaqi)

“Do not stipulate excessive amounts as dowry for women. If [doing so] was a token of honour in this world and a source of piety by Allah, then the Messenger of Allah (Allah bless him & give him peace) would have been more worthy of it than you....” (Sayyiduna  Umar ibn  al Khattab – Tirmidhi)

So what’s excessive? In my opinion, that would be asking for an amount that is above the means of the man. If it will take him several paycheck cycles to save up to afford your mahr (in addition to savings he must do to set up your new household or pay for the wedding), then maybe you might want to think twice about it. I’ve seen reasonable mahrs come in the form of gold jewelry, or a few thousand dollars.

If the mahr is going to make or break your relationship, ask yourself why? Does he really not have the means to care for a spouse at this time in his life? Or are my requests unreasonable? A woman can choose to be flexible and get opinions from her elders as to what is reasonable or not given the man’s circumstance. She should also ask herself:

Am I requesting this amount because this will show me how much he values me?

Do I need that security to move forward?

Or am I using this as a test of his admiration?

The Best Piece of Advice: Stay Calm & Keep it Simple

There’s a lot of advice out there. If you start asking your married friends about how much they asked for or gave for a mahr, you could get a wide range of opinions. The best rubric to stick with is that set by Prophetic tradition: do what is easy and affordable. Don’t be excessive. Islam always encourages people to take the middle ground approach– not too much and not too little. Is there a way you and your potential spouse can discuss the matter together? Maybe once you get an idea of what the other is looking for, you can start sharing figures. If two people are coming together based on good values and have done their homework to determine if the relationship can withstand the difficulties of life, then mahr shouldn’t be the thing that ends it.