Ramadan Reflection: Popular Imams and Scholars in the U.S. 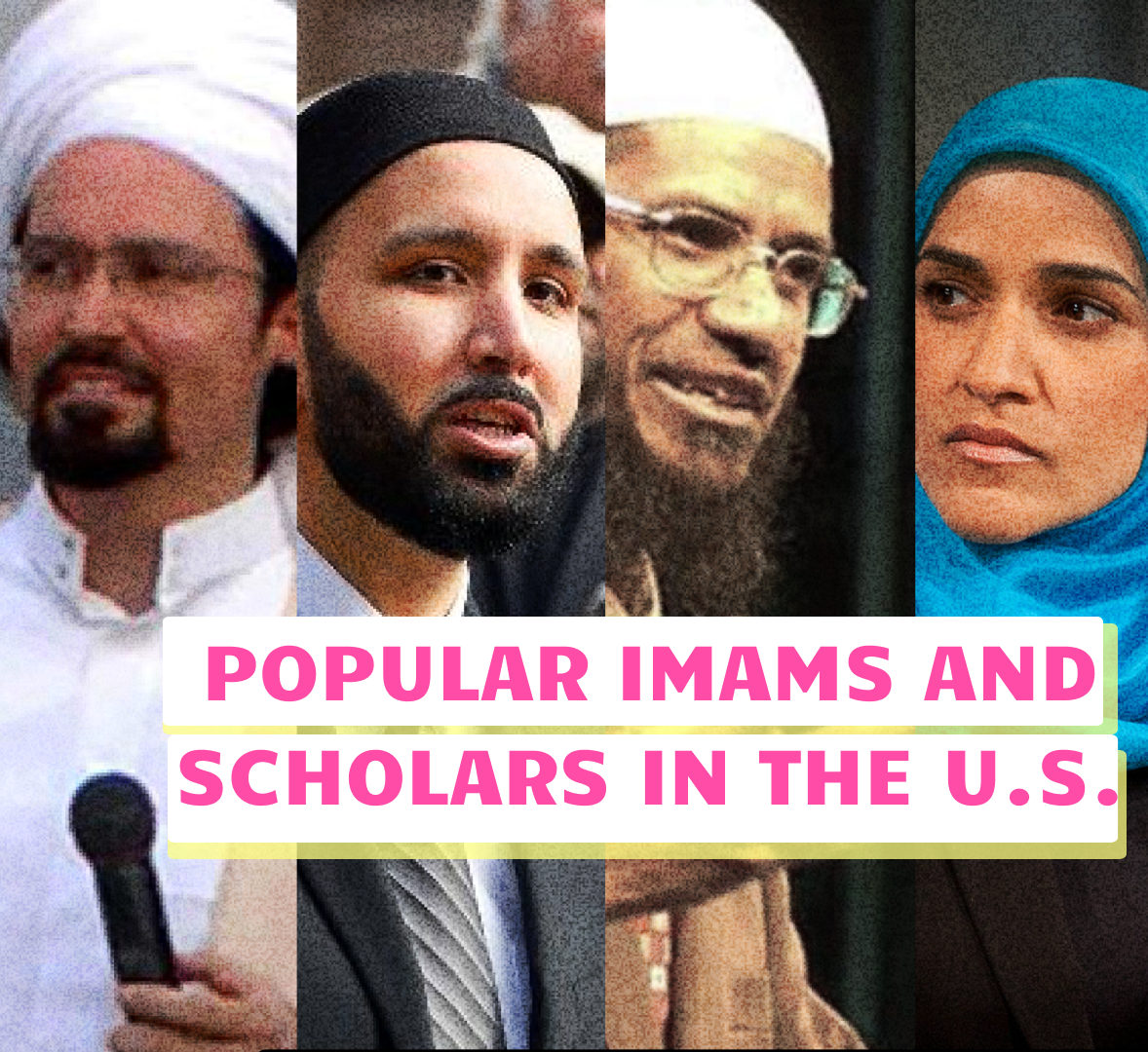 In the month of Ramadan, Muslims aim to reflect and hope they can change for the better. Ramadan is the month of mercy, the month of forgiveness, the month of Quran. In this month in particular Muslims live to hear Islamic reminders on how they can better themselves. I have composed a list of Imams and Scholars of Islam who are popular among the Muslim mass within the U.S. InshaAllah these wise individuals can help us reflect in Ramadan. I have included links to their lectures and make dua' that this can help us in finding and implementing knowledge of benefit in Ramadan.

Omar Suleiman is an American Muslim scholar, civil rights leader, writer, and public speaker who was born in 1986. He is the founder and president of Yaqeen Institute for Islamic Research, as well as an Adjunct Professor of Islamic Studies at Southern Methodist University and a member of the Ethics Center Advisory Board. He is currently the Valley Ranch Islamic Center's Resident Scholar and the Co-Chair Emeritus of Faith Forward Dallas at Thanks-Giving Square, a multi-faith alliance of clergy working for peace and justice. Suleiman's study of the Islamic heritage have carried him to Jordan, the United Arab Emirates, and Malaysia, among other Muslim countries. He earned a Bachelor's in Islamic Law, a Master's in Islamic Finance and Political History, and doctoral studies in Islamic Thought and Civilization from the International Islamic University of Malaysia, in addition to traditional Islamic sciences certifications. Omar Suleiman also acted in the award-winning Inspiration Series, a drama mini-series that attempted to teach moral lessons from the life and example of the Prophet Muhammad. The series was well-received around the world, and it went on to win the Best Movie award at the 2016 International Contribution to Dawah Awards in Dubai.

Lectures by Imam Omar can be found on Muslim Central

Suhaib Webb is an American Muslim imam who converted to Islam in 1992 from Christianity. He was the imam of the Islamic Society of Boston Cultural Center earlier on. Webb left his job after converting to Islam in 1992 and went to the University of Central Oklahoma, where he earned a bachelor's degree in education. He also studied Islam and Arabic privately with a Senegalese sheikh, learning enough to become a community leader in Oklahoma City, where he was hired as an imam at the Islamic Society of Greater Oklahoma City. He began teaching at Mercy School, an Islamic K–12 school in Oklahoma City, at the same time. He also graduated from Al Azhar University with a degree in Islamic Law. Senior UK government officials, including representatives from nine of the most powerful Whitehall departments, regard Webb as a notable moderate leader for mainstream Muslims, alongside Hamza Yusuf and Amr Khaled, who should be given more support in providing leadership to Muslims in the West, according to a strategy report released by the UK government. In 2010, the Royal Islamic Strategic Studies Centre named Webb one of the 500 Most Influential Muslims in the World.

Lectures by Imam Suhaib can be found Here

Shamsi Ali is the Chairman of the Al-Hikmah Mosque and Director of the Jamaica Muslim Center in Jamaica, Queens, New York City, and a famous Indonesian Muslim Scholar recognized for encouraging interfaith discussions across Abrahamic religions in the United States. Born in 1967 and raised in the village of Bulukumba in Kajang district of Bulukumba Regency in South Sulawesi, Indonesia. In 2002, the International Religious Federation named Imam Ali "Ambassador for Peace," and he received the 2008 ICLI Interfaith Award. New York Magazine called him one of the seven most important religious leaders in New York City in 2006. He was also one of 100 people honored with the Ellis Island Medal of Honor in 2009. This prestigious non-military gold medal is one of the highest honors bestowed by the United States government on native-born and naturalized citizens who have made significant contributions to American society and the world, and Shamsi Ali received it for his unwavering commitment to bridging religious divides.

Ramadan Lecture by Imam Shamsi of 2022 can be found Here

Siraj Wahhaj is the leader of The Muslim Alliance in North America and the African American imam of Al-Taqwa mosque in Brooklyn, New York (MANA). He was also the Islamic Society of North America's previous vice-president. Wahhaj was born Jeffrey Kearse in Brooklyn and raised there. His mother was a nurse, while his father worked as a dietician in a hospital. In 1981, Wahhaj built a mosque in a friend's Brooklyn flat. Soon after, the congregation bought an abandoned clothes store and transformed it into Masjid at-Taqwa. At the mosque, Wahhaj leads daily prayers and delivers the Friday sermon. In addition, he teaches entire days of Islamic studies, Arabic, and marital therapy. In 1988, Wahhaj organized a local Muslim community anti-drug patrol in collaboration with local police. The campaign, which profoundly changed the character of the neighborhood and garnered high acclaim from the New York City Police Department and international attention from the media, received high praise from the New York City Police Department and international attention from the media. He was the first Muslim to conduct an invocation (opening prayer) at the US House of Representatives in 1991.

Khaled Hosseini was born in 1965 in Kabul, Afghanistan . His father was an Afghan Foreign Ministry diplomat, while his mother was a history and Farsi teacher at a Kabul high school. The Hosseini family moved to Paris in 1976, thanks to the Foreign Ministry. In 1980, they were ready to return to Kabul, but their motherland had already been through a terrible communist coup and the Soviet Army invasion. In September 1980, the Hosseinis migrated to San Jose, California, after seeking and receiving political asylum in the United States. Hosseini graduated from high school in 1984 and went on to Santa Clara University to pursue a bachelor's degree in biology, which he received in 1988. He entered the military the next year. Hosseini began writing his debut novel, The Kite Runner, in March 2001, while still practicing medicine. It was released by Riverhead Books in 2003. That debut launched one of the most illustrious literary careers of our time. Khaled Hosseini is now one of the world's most well-known and bestselling authors. His works, The Kite Runner, A Thousand Splendid Suns, and the Mountains Echoed, have been translated into over 70 languages and have sold over 40 million copies throughout the world. Khaled was named a Goodwill Ambassador for UNHCR, the United Nations Refugee Agency, in 2006. Following a tour to Afghanistan with the UNHCR, he founded The Khaled Hosseini Foundation, a 501(c)(3) non-profit organization.

Karuna Riazi is a native New Yorker who comes from a huge, loving extended family and has had the difficult experience of being the oldest sibling in her family. She is an online diversity advocate, blogger, and educator with a BA in English Literature from Hofstra University. She was named to NBC Asian America's Redefining A-Z list in 2017, which recognizes up-and-coming Asian-American and Pacific Islander talent, and her work has appeared in publications such as Entertainment Weekly, Amy Poehler's Smart Girls, Book Riot, and Teen Vogue, among others. Karuna enjoys writing about strong women carving their own pathways to their goals. She also enjoys preparing new delightful delights for friends and family to enjoy. Her middle grade debut, The Gauntlet (S&S/Salaam Reads, March 28, 2017), comes with a companion, The Battle (August 2019). A Bit of Earth, her next book, will be published by Greenwillow Books in 2022. She's also written an adaptation of The Jungle Book for the Apple TV show Ghostwriter (Sourcebooks/Sesame Workshop, 2019).

Ramadan Mubarak! May Allah accept our efforts in Ramadan