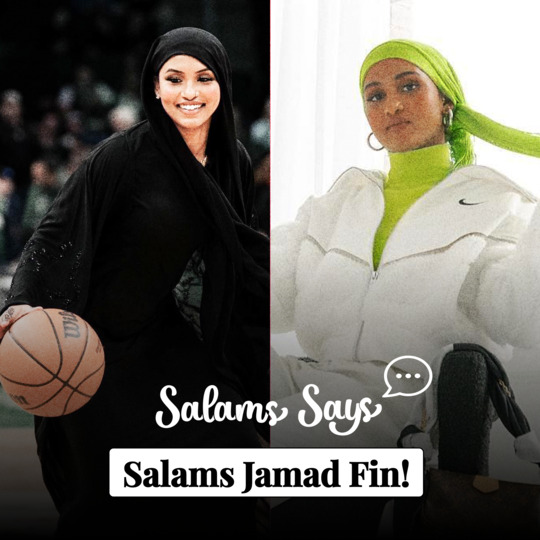 Who says sports are only meant for men, and that women should stay away from such straining activities. The times have surely changed and women have proved that they can be equally good in sports if not more. Such an inspiring example we have today is of Jamad Finn, a Somalian Muslimah professional basketball player. She is a source of motivation for the Muslim girls of her community and the girls all around the globe.

Raised in the United States, Jamad started getting into sports at a young age. She soon became aware of the fact that many girls are not seen in the basketball court like her. And as a young Muslim girl representation was lacking in almost all the sports. So Jamad pushed herself hard to get better at basketball. During her interview she reflected back on her struggling days,

"When I grew up, I had no one I could look up to or even ask for advice on challenges of being a Muslim girl and playing basketball, so I had to do everything myself. I decided to continue playing basketball while wearing my headscarf, because I did not want to give up on something I love."

Jamad stood out on the court because of her excellent game skills but also because she had a scarf wrapped around her head. Sure it was little surprising for the people to see a young Muslim girl playing on the court, but her sincere passion for the basketball earned her respect local ballers and members of her community. Many girls looked up to her as they felt a connection to her and started joining the court.

Reminiscing this time of her life Jamad recalled,

“It started as just pickup basketball at the community centers,” said Fiin. “Lots of Muslim girls came out that never had a chance to play growing up because their families were very conservative. We had some great games at the beginning but then a lot of the girls left for college or took jobs to help support their families.”

Jamada's passion grew more and she started hosting clinics at community centers and courts around Greater Boston. Girls between the ages of 11-18 were welcomed. She taught them how to dribble, lay up, techniques to pass the ball, defensive mechanism and so much more. Since then she has come a long way. Jamad started her own organization, Jamad Basketball Camp. She never looked back from here.  Jamad is an inspiration for many young girls who don't play sports because of cultural and religious restrictions.

Jamad was born in Massachusetts, United States. Her parents belong to Somalia, East Africa. Jamad attended Boston Latin School for highschool and then took admission in Emmanuel College. She's the pride of the college as is the captain of the Emmanuel College Basketball Team. She is also the captain of Somalia Women's National Basketball Team and has participated in FIBA tournaments in Dubai and Uganda.

Jamad Fiin is also very popular on her social media. With 1million followers on Instagram and 2.1M following on TikTok. She posts snippets about her life and game. Drake, a famous Canadian rapper invited her to Toronto to run a basketball clinic at the Scotiabank Arena, home of the 2019 NBA World Champions.

“It was pretty incredible,” Finn recalled. “We were able to connect with so many girls in the Toronto area and they got the chance to play ball, some for the first time, on a court where the NBA champs played. That’s the type of moment that can inspire someone, a moment they’ll never forget.”

The most surprising thing is her clinics are absolutely free. You just have to reserve your spot online and that is it. No charges are taken. The reason she stated for doing this is,

‍"I wanted to make sure there aren’t any barriers stopping young girls from playing. Basketball should bring people together so that’s what we’re trying to do one camp at a time.”

She is using her social media to empower young people through basketball. Yosinoff says Fiin’s impact is immediate.

“Jamad has given young Muslim girls the feeling that they can accomplish something on the basketball court," he said. "She’s just an amazing inspiration for all young boys and girls, especially in the Muslim community.

She wishes to continue her clinical camp for as long as she can while pursuing a career in biology. Jamad's determination is a precedent for many young girls.

Girls who have been wanting to get into sports but can not due religious and cultural reasons. She has taught them your hijab is not your weakness but your strength. Nothing can get into your way as long as you are willing to work diligently on your dreams.

May blessings of Almighty Allah be upon those who are chasing after their dreams and help them in achieving it.