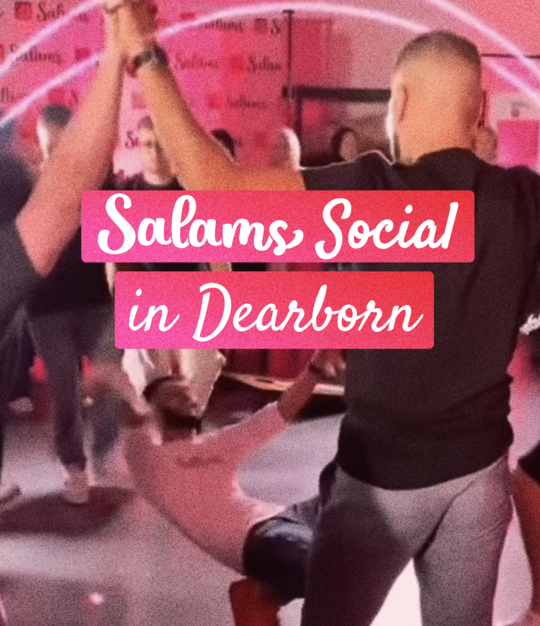 What a Viral event!

I know you were scrolling through your Instagram & Tiktok last weekend, and your feed was filled with some of the most amazing Muslim Influencers repping Salams! The vibes at the Salams Social Event at Haraz HQ last weekend was explosive! Muslim Influencers and Salams users were able to connect, share stories and bond over the delicious food served at the event. Chai, coffee, cinnamon buns, cakes, and delectable treats were served. It was a truly euphoric event. The Muslim masses were able to come down to Haraz HQ in Dearborn, Michigan to meet over 15 Muslim Influencers IRL. There were various games and giveaways, it was an incredibly lively meet and greet.

Salams held this Meet & Greet event to allow people who may have connected on the app to meet in person and bond over their values and interests.  As soon as I walked in the door, the fresh scent of cardamom, cinnamon, and a variety of spices filled my nasal passages and awakened my senses. Fluorescent pink lighting dims, and the room is filled with renowned Muslim influencers creating humorous content and various forms of comedic advertisement for the salams app. There was Jenga, Cornhole, A Latte Art contest, and a Pop-the-balloon giveaway where attendees won some prize money!

People came from all over to attend this event like Humza and Amraha, a beautiful Salams Success couple who met on the Salams app. They traveled all the way from Ohio to attend the Salams Social in Dearborn, Michigan. They played Jenga during their first in person meetup after matching on the Salams app in 2021, and were married 6 months later Alhamdulillah!

They were able to reenact their first meet at the Salams Social event and it was so sweet to see! MashaAllah they are relationship goals! They gave advice regarding their first interaction on the Salams app. Humza and Amraha explained how they didn't waste each other's time and communicated their life goals, family goals, expectations, and religious ideals. They believed in involving each other's family early on and Alhamdulillah they said they've had a positive marriage, full of growth, love, and positivity. Say MashaAllah! May Allah bless them with a happy marriage and answer all of their Du’as, Ameen.

I had the opportunity to meet and interview these influential muslims during our time together. It was very enlightening. We discussed their hopes and dreams, and how they utilize their social media platform to connect to Muslims all over the world. As well as educate the masses and give Dawah along the way. We talked about how much they appreciate the positive feedback they’ve received from the Muslim community. Their stories were all very relatable, as well as their content. We talked about their creative process and the amount of work that goes into the content that we all enjoy. Unfortunately I wasn’t able to interview all of them, due to the abundant festivities, however I was able to speak with four of them.

Ibrahim’s Mother opened up about her experience creating content with her son. She uses his platform to create awareness and to encourage others to share their stories. Her content varies as she shows Ibrahim’s lifestyle, his hobbies and interests. She also talked about her interactions with Ibrahim’s fans and how they feel inspired by Ibrahim’s story. As well as the love they received from their community. Ibrahim’s platform extends to Australia, Indonesia, and all over the US.

Wasan is an amazing down to earth gorgeous influencer. She originally created her Tik Tok account to watch her little brother’s videos. She eventually started to create content and she gained instant popularity. She’s primarily a Tik Tok creator, however her Tik Tok followers began following her on Instagram and her platform grew.

Wasan opened up about how her platform has allowed her to meet so many Muslims with different backgrounds and different stories. She uses her platform to promote various charity campaigns and inspirational messages about how to remain positive as a Muslim. She creates content about muslim fashion, marriage, and finding the right spouse.

Sofia opened up about her social media experience and spoke about how she used her platform to share her Hijab journey. She wanted to inspire muslim women by sharing her story. She often posts hijab tutorials for muslim women who want to experiment with different hijab styles.

Erva is a Muslim influencer who uses her platform to display different Islamic hijab styles for women.  Erva’s social media journey started when she began posting about her travels. She began posting pictures of the scenic views in Turkey and her followers began to increase.

After receiving a lot of positive feedback, she later began posting lifestyle content and her following began to increase as well as her popularity. Her popularity has allowed her to connect to different Muslims all over the world.

She went to school for media and after taking comedy classes she began performing and she eventually gained a following. Nina is also a boxer who holds her place in the ring.

Al-Hamdulilah I was blessed with the opportunity to talk with so many wonderful,  influential people with various backgrounds. It was truly an honor to be able to hear about their inspiring stories. The Salams event allowed me to connect with these wonderful individuals and learn about how they use their influence to give Dawah and educate people from all over the world. This experience was truly inspirational.

This event was a huge success. The warm atmosphere, the delicious food and the good vibes. If you're wondering when the next event is, follow Salam’s social media page and stay tuned. Your best friend and your future spouse are waiting. Stay tuned for the next IRL Salams experience where they truly "Bring Muslims Together!" So the next time Salams holds a networking event. I hope to see you there!!!