What is the Isms Project 2.0 & Why did Salams Sponsor it? 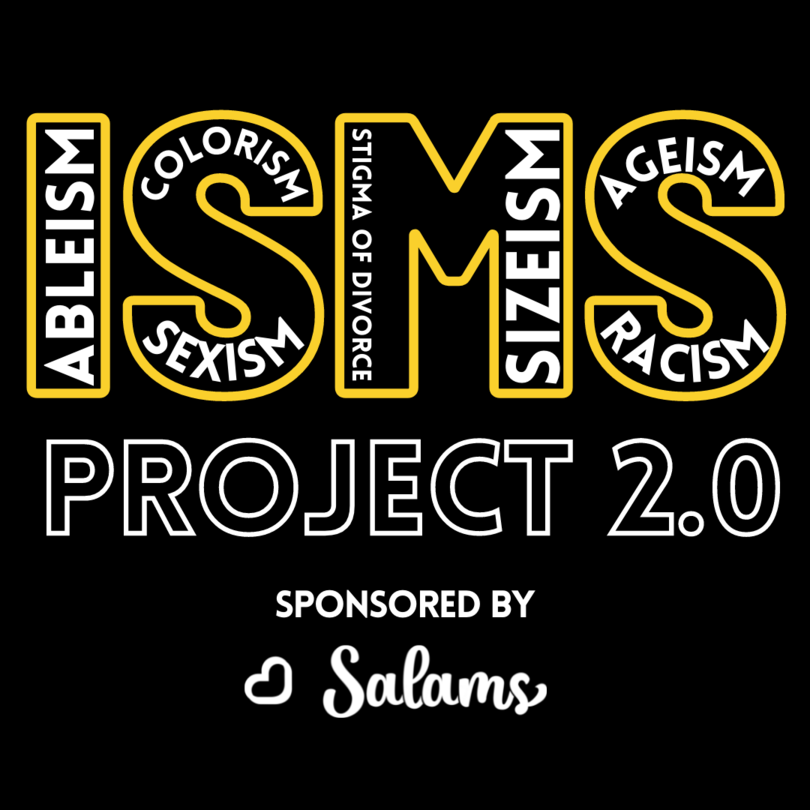 ‍What is the Isms Project?

In late 2018, after recovering from a series of failed relationships, I sought answers to why it was so challenging to get married. I began asking young Muslim women across the U.S, between the ages 25 to 35, about the problems they encountered when pursuing marriage, and noticed the same themes coming up. These common threads were then grouped into categories and I began searching for others who had similar experiences of sexism, ageism, and racism in their pursuit for marriage.

Fast forward to 2021 when I launched the Isms Project, a photo series documenting the Muslim marriage crisis. Myself and a team of Muslim female creatives, interviewed and photographed four Muslim women from across the country to discuss the isms, or prejudices, they faced in their pursuit of love and marriage. The first part of the series highlighted encounters with sexism, ageism, racism and colorism. Along with the photos, we included a quote from each woman to discuss how the ism impacted her search for a spouse. The project gained widespread mainstream media coverage, with features in Newsweek, AJ+, and the Washington Post.

With the attention, came more stories. Dozens and dozens of women came forward to share the challenges they faced when trying to get married. This second iteration of the photo series, the Isms Project 2.0, explores new themes: the stigma of divorce, sizeism and ableism. These isms were chosen not only based on the frequency of the experience, but on the sensitivity of the subject. Just as in the first part of the series, we wanted to bring the taboo topics to the forefront and use Islamic principles to dismantle long standing stigmas.

Why did Salams Sponsor the Isms Project 2.0?

In an effort to make a bigger impact, this year (2022) we teamed up with the Salams App; the popular Muslim Marriage, Friendship, & Networking app. Salams is the proud sponsor of the ISMS Project 2.0 and is committed to bringing awareness to the various stigmas that surround Muslim women in their marriage-seeking process. Above all, Salams aims to encourage its users to focus on evaluating character when looking for a partner.

At Salams, we value shifting the focus towards character when people are seeking marriage. It’s what Islam is all about and the example that Prophet Muhammad, saw, set for us. Sponsoring projects like these, using our platform to raise awareness and continuing to work on who we are, it’s part of our own personal development as a company.- Lina Salams Marketing Director

More than that, discrimination beyond personality is a challenge any one of us can face, 1 in every 2 couples gets divorced in the developed world. As facilitators of marriage, Salams understands how women are more scrutinized for any previous marital history or if they have kids from a previous marriage. To live in a society that still doesn’t believe in second chances; especially for women is hard to accept. Salams plans to promote the focus on character and the benefits of personal growth.

To provide more analysis on the subject matter, we produced a documentary that highlights the women’s stories, and provides insight from Muslim researchers, scholars, matchmakers, and marital therapists. This photo series aims to offer solace to women who are struggling to get married, while also informing others of the issues in an effort to combat the marriage crisis. We hope that the photos and the documentary lead to more important conversations within our community about the values we hold and how they impact our ability to form families.

What is the Stigma of Divorce?

“To be divorced, female, and Muslim is the ultimate scarlet letter. In our community, potential suitors see us as leftovers, mere damaged goods. There were fruits that we cultivated in our first marriage; growth spurts, milestones met, children born and faith deepened.  Fruits, not burdens. And yet, these fruits are used against us.”

After last year’s launch of the Isms Project, I had women from across the U.S and around the globe, reaching out to discuss the challenges they were facing finding love. I was surprised to learn that women who have been previously married had some of the worst experiences in the marriage market. They wore the ultimate scarlet letter. The comments they received included sentiments that demonstrated they were at the bottom of the dating pool. One woman said that men viewed her as “old” and no less desirable because she was no longer a virgin.

Because of the cultural baggage that is associated with divorce, sometimes community members and other married women cut off ties with divorcees. I’ve heard women, matchmakers or mothers, tell divorcees that they should be willing to consider men that don’t fit all their criteria because they should be happy anyone is willing to marry them. This induces shame and pressure for a woman to overlook her worth and values just to get married.

When I spoke to single mothers actively looking for marriage, they told me that in the eyes of a potential spouse, their children were viewed as burdens–mere dollar signs that someone needed to add to their monthly expense reports. This type of negative thinking is contrary to the Prophetic tradition where there are numerous stories of the Prophet Muhammad, Peace & Blessings Be Upon him, and his companions, marrying divorcees and widows often with children.

“Ever since I can remember, I’ve been self-conscious about my weight. The commentary wasn’t always direct. Sometimes it was a stare if I took an extra helping of dinner, or a referral to a new gym. I always knew what they wanted to say– lose weight. Yet, it didn’t really impact my day-to-day until I started looking for a spouse. I would go on dates with these guys from the apps, and they would say, you’ve got a pretty face, but I just don’t want to end up with a big girl. Aren’t I more than just my body?” - A.A  34 years old, Egyptian American, middle-school educator from Minnesota

The textbook definition for sizeism is “prejudice or discrimination on the grounds of a person's size or weight.” We wanted to start a conversation around a woman’s size, and how that factors into her ability to get matches. For Muslims, modesty is supposed to be what’s most prized when it comes to her appearance. Somehow, this value is overlooked when a woman becomes an eligible bachelorette. Her value as a prospective bride shrinks if she’s not a size 6. Sizeism exists in the Muslim community–it’s just not talked about.

When I interviewed Muslim women about this topic, I heard similar stories: parents who put their young girls on weight loss diets, matchmakers who chided them about their size, and men who said that her pretty face didn’t make up for “big body.” Different women, from different ethnic communities, but the same stories. Such behavior is contradictory to Islamic teachings that emphasize a focus on religiosity and character over physical appearance.

In the sizeism photo, the models' wrists are chained together by measuring tape. The measuring tape represents the pressure society has imposed on a woman to be the perfect size. The model looks directly at the camera in a haunting pose. Her face is expressionless. Her hands balled in fists, with the shackles of the measuring tape hanging in front of her. The setting is in San Francisco, near the Golden Gate Bridge in a wooded area called Lover’s Lane.

“I was born hard of hearing. I wore a hearing aid up until my mid-twenties when I received cochlear implants. That changed my life. Before that it was really hard navigating the Muslim community, Sunday School and Friday khutbas, because they didn’t always factor in inclusivity and accessibility. Now, as I search for love and marriage, I’m feeling it again–the otherness. Be it matchmakers or men I meet, they all want to put me in a box. Ignore my disability or handle me with care. How can I get them to really see me?” — S.H. 33 years old, Pakistani American Scientist from Massachusetts

We chose to highlight ableism, which is the discrimination of and social prejudice against people with disabilities based on the belief that typical abilities are superior, because it’s not necessarily a taboo topic, it’s a nontopic–meaning people overlook it as an issue completely. And yet, there are whole organizations for Muslims with disabilities like Muhsen, Global Deaf Muslim, that work hard to bring important issues about accessibility to the forefront.

This stigma isn’t just pervascent for individuals with physical disabilities, but also those with mental disabilities. However, in this series, we highlight just one experience; that of a woman who is hard of hearing. In the documentary, we highlight the story of a woman who is hard of hearing. Sana, a 33 year old Pakistani American woman from Massachusetts, explained to me over a Zoom call, that she was often passed over because of her disability. Though she was unable to be in the photo shoot due to family obligations (she is represented by a stand-in model), Sana wanted us to share her experience growing up in a Muslim community where her disability was often ignored or forgotten.

In the ism photo for ableism, we have a woman trapped in a fisherman’s net. The net is symbolic of the stigma that says people with disabilities must be put in a box, handled with care, and separated from the rest. It is the stigma, not the disability, that leaves the woman feeling trapped, and unsure of how to find the romantic partnership through marriage that she’s been searching for.

With this photo series, I hope to increase conversation in the Muslim community (and beyond) about how these isms prevent relationships and marriages, and how with time we can overcome them. I believe these isms are not permanent features of our society, and are certainly not part of Islamic tradition. By sharing stories about the types of women (widowed, divorced, working, older) that the Prophet and the Companions married, we can show how Islam elevates women and promotes diversity. If we continue to shy away from these conversations, I fear that the marriage crisis will only continue to worsen. However, if we come together and confront these isms head first, we have the potential to see a resurgence of healthy, Muslim marriages. InshaAllah.

Salams intends to continually to work on the product in a way that shift attention towards more important factors Muslims should look to in considering a spouse. When providing tips on users navigating the online marriage platform we encourage users to focus on islamic indicators within profiles:

Educational and Practical Resources to Help us Move Past the Isms:

Islamic Services for Deaf and Hard of Hearing (ISDHH): https://www.isdhh.org/projects.html

Visit : nailahdean.com to see all the photos in the series and watch the documentary