Finding Love is a Marathon, Not a Race 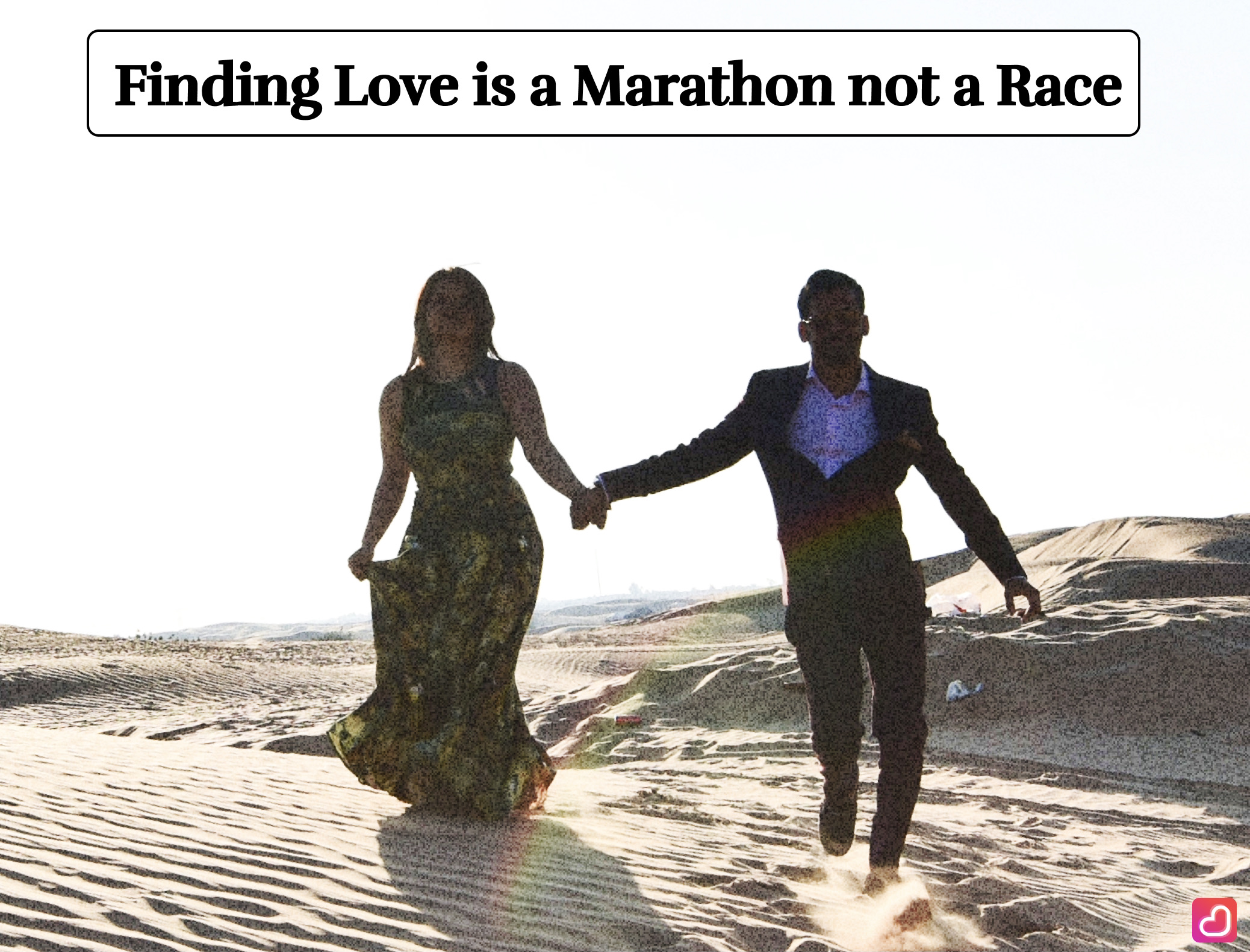 During law school I lived in Boston on the famous Commonwealth Avenue that runs through much of the city and hosts part of the course for the esteemed Boston Marathon. I remember watching the runners as they passed my apartment, dressed in layers, and fancy sneakers. They were prepared for the elements and had trained for that race for months, if not years before they registered. The struggle, the dedication, the focus– it was impressive!

Every time I recount the struggle of finding love, on and off the apps, I think about those runners. Why? Because finding love is a marathon, not a race. What does that even mean? It means that like a marathon, finding the one takes loads of practice, failed attempts, and self care. Let me explain.

‍1. The Road to Love & Marriage Requires a Training Period

No serious runner would ever expect to run a marathon without rigorous training. Those who run serious races and marathons, know that the process doesn’t just involve registration months and months in advance, it requires loads of mental and physical preparation. Real runners only sign up for marathons after they’ve done several 5Ks or 10Ks. They set timelines for themselves, seek out training groups and coaches to make sure they have what it takes to cross the finish line, before they even sign up.

Finding love is no different. You have to work for it, or “train.”  Before you even start courting someone, you should read about relationships. Do you even know what you’re looking for? Have you done any premarital workshops? If not, check out the Family & Youth Institute's pre-marital toolkit or the Suhba Institute’s Strong Couple’s Course. These resources will help you identify what’s most important in a relationship, and inspire you to approach a relationship with Islamic principles in mind.

And when you’re in the thick of it, swiping on the app, and filling your calendar with coffee dates, know that it most likely will take time before you meet your person. Each potential you meet on your journey, will teach you something new about yourself, and about the courtship process. For example, I once started talking to a guy who kept pushing off an in-person meeting. I kept making up excuses for him, until one day he just disappeared. That disappointing experience led me to set better boundaries/expectations in my next relationship.

Have you encountered similar lessons? Think of such moments as part of the training period. It’s trial and error. Sometimes you’ll get it right, but more often than not, you’ll get it wrong, and you have to learn how to pick yourself up and start again.

‍ "And then my soul saw you and it kind of went, 'Oh there you are, I've been looking for you.'" — Iona Mink

The best advice I’ve heard from those who have met their spouses online was to take breaks. When you’ve had a bad run, or you’re tired of swiping, DO NOT GIVE UP, just take a break. Hop on and off the apps as if you’re riding one of those hop on, hop off tour buses in Europe. When you have the energy, and enthusiasm needed to dive into dating/courting, then get to swiping. If you’re feeling pessimistic or stressed about other life things, then hop off. You don’t have to do anything dramatic like delete your account. Simply hide your profile and hibernate.

Try engaging in a bit of self care. Before a big marathon, any runner will tell you they had sprained ankles, swollen feet, and maybe even torn ligaments! Although they might have felt defeated, and ready to throw in the towel, they did not. They kept at it because they knew what they wanted, and they mentally prepared for the hardship they would face on their way to the finish line. It’s important to take moments to detox from the dating scene, heal your wounds, and then pick yourself up again and run towards the finish line of marriage.

I’ve spoken to a lot of singles, and they all complain that they don’t mind the disappointments, they are just mentally and emotionally drained. They are tired of the hassle of meeting new strangers, and talking about their favorite tv shows or books. They don’t want to hit re-play on their life story because it feels unnatural. When I hear their setbacks, and exhaustion, I tell them to just step away, find tranquility elsewhere and return when their heart and mind feel more at ease.

3. It’s Not Failure, it’s practice for the real one

Every once in a while, I hear these unicorn stories about the guy or girl that signs up for Salams and after just a handful of swipes, finds the person they end up marrying. While those are beautiful stories, MashaAllah, they should be recognized as outliers. For the vast majority of people who found their spouse online, it took time. Don’t expect to jump onto the apps and after four matches, you find your soulmate. Finding love and marriage requires patience and time.

There will be times when the matches you get will make you want to quit. Have faith and know that each disappointment is preparation for the one you’ll marry. You’re learning. Keep a journal or even just jot down notes in your phone to remember take-aways from each relationship or encounter. I think some of my most important lessons came from identifying red flags, which became helpful in avoiding unhealthy pursuits later. If ever you have a hard time envisioning the rainbow after the storm, read these Salams success stories. They can remind you that there is hope and Allah rewards those who are patient and persevere.