What Are the Muslim Wedding Ceremony Rituals? 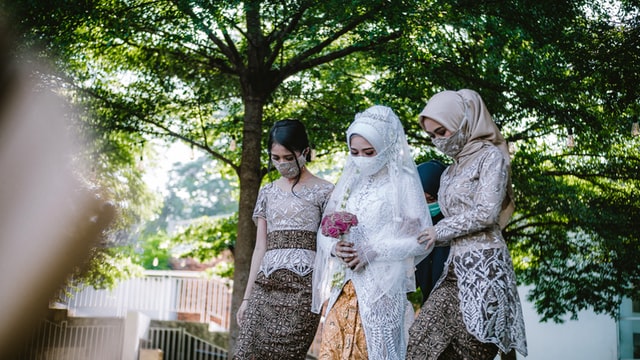 If you have been invited to attend a Muslim wedding ceremony for the first time, you may be wondering what to expect. These elaborate celebrations can last for days, and they are certainly a sight to behold. A Muslim wedding is highly structured, but it still presents the opportunity for much fun and festivity.

Learn more about the stages of a Muslim wedding and what is expected of both the guests and the happy couple.

What Are the Stages of a Muslim Wedding?

A Muslim wedding ceremony has many stages to it, but they all start with the tolbe. During this important ritual, the groom will officially seek the permission and blessing of the bride’s family over their pending marriage. If they are agreeable to the union, everyone will read a short prayer from the Holy Quran and partake in tea, coffee, or cordial.

Once you have made it through the tolbe and the mangni (engagement), it is time to turn your attention to the wedding ceremony itself. These next six portions of the bride and groom’s special day are steeped in rich tradition.

Before the Muslim wedding ceremony, many families will opt to have a zaffe. The zaffe is a celebration that takes place starting at the houses of both the bride and the groom. This part of the ceremony is filled with music and dancing to symbolize the joy of both families at the union of the bride and groom.

Zaffe is meant to be an upbeat celebration before the ceremony, similar to how the walima will be a celebration after the wedding takes place. Culture and tradition may not always have a zaffe, but it can be a fun way to kick off the festivities for both families.

For most individuals, the nikah is the most significant aspect of the Muslim wedding ceremony. The groom and his representatives will propose in front of two or more witnesses, officially going over the final details of the meher or mahr. It is during this stage of the celebration that the marriage contract is formally signed.

The meher or mahr is an essential part of the marriage contract. It is an official statement detailing what the groom is going to give the bride. A portion of the promise will be delivered before consummation, and another amount will be distributed throughout the bride’s life. In many modern Muslim marriages, the ring is part of the meher.

During the nikah, the couple will accept the marriage contract three times, followed by the official signing. They do this with the traditional Arabic “qubool” or more modern ceremonies that utilize the English version of “I accept.”

Both members of the couple and two male witnesses will sign to legalize the marriage in the eyes of both the law and religion. If the ceremony involves the separation of men and women, the wali (a male representative, often the bride’s father) will represent the bride.

After the marriage contract is signed, the bride and groom can share a piece of fruit.

This is also when the katb al-kitaab may come into play, the time in the Muslim wedding ceremony where the terms of the marriage are stated and the bride and groom sign the contract in the presence of their guests.

The dabke is a fun way that guests will celebrate at many Muslim Arab weddings. Instead of sitting down to enjoy the festivities, most wedding guests will participate in the dabke. Oftentimes, this starts as a performance by professional dancers who open up the invitation for all guests to dance in this traditional ceremony.

When the floor is open for everyone to join in on the fun, dancers will gather in a circle and dance side by side with each other. The dancing lasts for a long time and can be a great way to get in the celebratory mood at the wedding ceremony.

Some brides and grooms may want to incorporate their faith as a central tenet to their wedding festivities. They can do so by electing to have an additional religious ceremony after the nikah has been performed. The same officiant who performs the Muslim wedding ceremony can also facilitate the vows and blessings portion of the day.

The vows and blessings include important components such as:

In many modern ceremonies, it is now common to offer vows from the bride to the groom and vice versa. Many couples opt for traditional vows that reference the Holy Quran and the Holy Prophet as well as promises to be faithful, helpful, and obedient.

After the ceremony is complete, many couples will opt for a grand finale for their special day. The bride and groom will climb into a decorated vehicle to head back to their home or a hotel room for their first night together. They will say their goodbyes to friends and family members who have gathered before departing from their big day.

As they drive through town, their friends and family members will follow in their own vehicles. During the whole trip back to the place the couple will stay for the night, wedding guests are encouraged to play loud music and blow their horns in celebration to let everyone know that the car leading the procession contains the newly-married bride and groom.

Once the wedding contract is officially signed, guests may take part in the walima. This is a celebration similar to a wedding reception in Western culture. However, it tends to last a lot longer than the traditional Western reception. In some instances, the walima can last for up to two days, so make sure to come well-rested and ready to party.

There are some different opinions on when the walima should be held. It always takes place after the nikah, but it may not occur on the same day. The Messenger of Allah says that the first day is the best option for this celebration. However, some celebrate on the day after consummation or potentially even the day after that.

This ceremony is abundant with culture and traditions. It will often have many items, including a menu to match, meant to represent fertility and abundance.

How Long Are Muslim Weddings?

Compared to some other cultures, a Muslim wedding ceremony may not last as long as you might be anticipating. The nikah itself is relatively short and can take fewer than 20 minutes. Even the vows and blessings portion of the ceremony does not take long to complete. However, you should be ready to spend a long time celebrating the bride and groom.

The dancing and feasting portion of the wedding can last all night and into the next day. In some situations, a bride and groom may opt to have their walima on the day after their nikah once the marriage has been consummated. This can stretch the celebration out to several days instead of finishing everything on the same day.

What is expected of everyone at the wedding in terms of proper attire? The difference between guests and the bride and groom can help you dress appropriately for this major event. You should plan to dress up, but these guidelines can help you select the perfect outfit for the occasion.

What Do the Guests Wear?

The attire of the guests is often selected at the discretion of the couple or their family. The rules surrounding dress will depend on the comfort levels of the family and their religious background. If you are invited to a Nikah ceremony and unsure what might be appropriate, you should plan to dress modestly.

In most cases, it is a good idea to ensure that your attire completely covers your arms and legs. Choose a dress or a top that covers as much skin as possible with necklines that don’t reveal too much. Ceremonies held in the traditional mosque may require women to wear a head covering to the ceremony.

What Do the Bride and Groom Wear?

The bride’s outfit often changes throughout the celebration. For the nikah ceremony, she is likely to wear an elaborate gown adorned with pearls or jewels. She may wear any color she likes instead of limiting herself to one specific color, as is often seen in Western weddings with white dresses. In many cases, she may opt to wear red to make herself stand out from the crowd.

If the wedding is more traditional, a groom may wear the salwar kameez. This consists of white or black pants with a long tunic.

Preparing for a Muslim Wedding

You will be better prepared for the festivities once you know what to expect from a pending Muslim wedding ceremony. If you are still hunting for your happily ever after, you need to download Salams app. We have an extensive list of success stories to help you find the Muslim partner of your dreams! Sign up today to start improving your profile and meet your soulmate!